Despite the proliferation of breed bans, "One Bite Rules" and dangerous dogs laws, no policy anywhere in the world has been consistent in reducing the problem of dog attacks, because current approaches rely on punishing dogs and owners after-the-fact -- which contributes nothing to prevention.

What is needed is early detection of dangerous dogs BEFORE they ever take the first bite. Canine Risk Assessment is currently the only science-based methodology in the world that offers that capability, and ISCTA is the only organization offering certification in this newly-emerging field.

NOTE: The Canine Threat Assessment Guide was developed by Tamara Ann Follett of Ontario, and was made available at no cost to the world in 2007 in an effort to prevent municipalities from destroying dogs simply because of their breed. Despite this, it was not adopted as an alternative in Ontario and over 700 dogs were destroyed as a result. In contrast, the C-TAG risk assessment has been in use continuously since 2007 in Central Queensland Australia with positive results.

Dog-Human Attacks: the result of a "Perfect Storm"

Canine Risk Assessment methodology is based upon the fundamental truth that a "Perfect Storm" of events must occur before a dog-human attack can take place, and because of this, there are multiple ways to intervene such that the attack does not occur. The risk analysis approach identifies the exposures and recommends the controls needed to mitigate them, removing some of the key contributory factors to the "Perfect Storm". 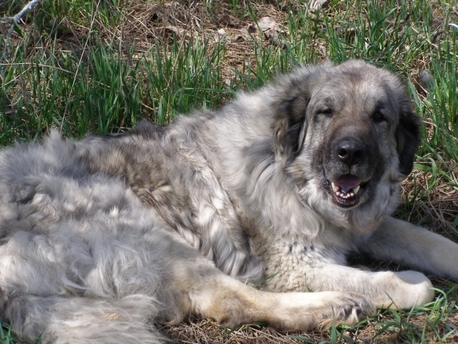 This dog looks sweet but he bit four people --including a police officer. You can't assess a dog by its appearance OR its breed. There are Dangerous Dogs NOT Dangerous Breeds.

Any dog can bite.

Thus, any comprehensive solution to the problem of dog-human attacks must address any dog with the potential to attack. But within this large group there needs to be a "sliding scale" of controls so that limited municipal resources are targeted at the class of dogs with the highest probability of inflicting serious or life-threatening injury.

To accomplish this “sliding scale”, we need to evaluate and categorize “problem” dogs based on the level of threat each dog poses. Then, for each increasing level of threat, more and more precautions would be needed -- it is logical that the more danger the dog presents, the more controls need to be in place.

Thus, a dog that has nipped when provoked could be ranked much lower –and thus need less precautions and less monitoring— than a dog that has severely attacked, unprovoked.

The solution is a standardized multi-level categorization system for aggressive dogs that recommends precautions commensurate with the level of threat the dog poses. This standardized multi-level categorization system, the Canine Threat Assessment Guide (C-TAG), was developed by Tamara Ann Follett for ISCTA, has undergone significant industry review[1], and is available from this website at no cost.

The Rockland Regional Authority in Central Queensland, Australia, is currently using the C-TAG in their dog bite prevention program. Australia leads the world in implementing a Risk Management Approach to decision-making at all levels of government. The International Standards Organization (ISO), the body responsible for defining global standards, is currently transitioning from a quality-based approach to one based on Risk Management and is thus just now catching up to Australia. For more information, contact Terry Walcott, Risk Management Consultant to Rockland Regional Council (remove spaces): tjwalcott @ bigpond.com

[1] Several hundred animal professionals worldwide have provided feedback on the C-TAG, but some of the more notable are: